Is DLP faster than SLA?

in most cases DLP is faster than SLA. A DLP printer will expose the complete build plate at once compared to the SLA printer in which the laser has to touch every single spot. According to SLA printer manufacturer Formlabs: “As a rule of thumb, this results in SLA 3D printers being comparable or faster when printing small or medium-size single parts, while DLP 3D printers are faster to print large, fully dense prints, or builds with multiple parts that fill up much of the platform.”

Additionally there are more factors that determine speed. One is the material 3D-printer combination and also the type of DLP printer used. For instance the new Carbon DLS, Envisiontec (ETEC) CDLM and 3DSystems Figure 4 technology are all extremely fast DLP printers.

Differences between DLP and SLA

Next to speed, there are two more distinct differences. One is that the laser is a round dot, and when moving it around it is a line with rounded edges. Depending on the laser spot size, it can print very accurate. However, the smaller the laser spot, the slower the printer. While DLP relies on an pixelated image. Making the edges of the part also pixelated.

What about accuracy or details of DLP vs SLA resin 3D-printers?

With a lot of software tricks, like AA (anti-aliasing), blur and pixel shift, these outer pixels of a DLP printer can be manipulated to a smooth image. In extreme imaging, it can look like the image below. 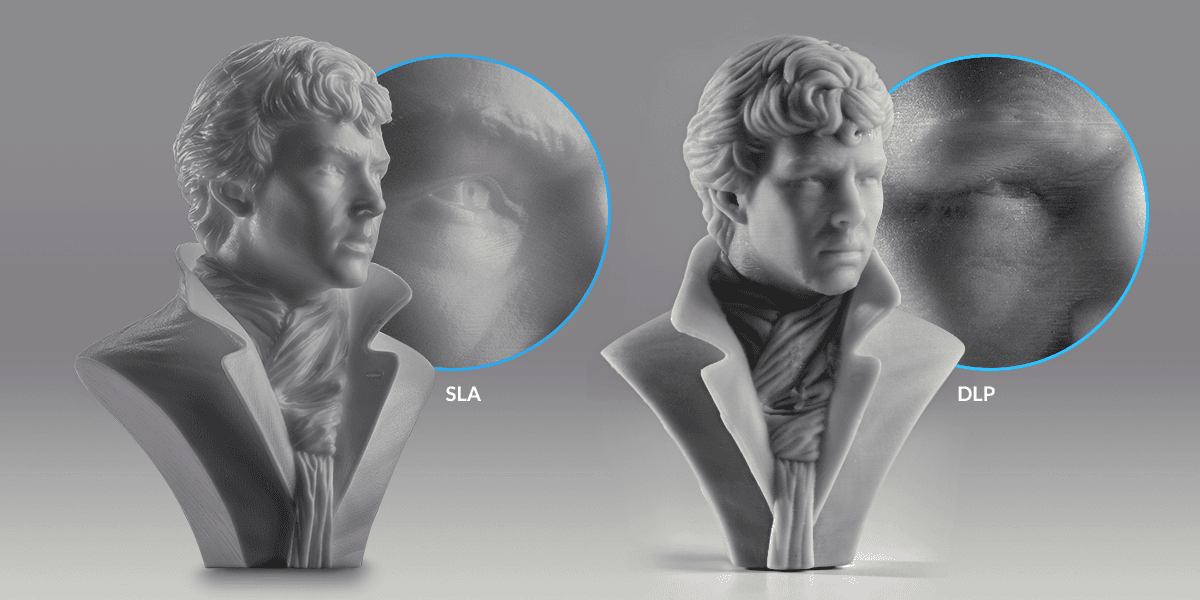 Image by Formlabs: difference in XY voxels on the organic shape of the models. Image by laser-based 3D-printer manufacturer Formlabs.

The biggest disadvantage of DLP is that, in order to increase the build volume, you would either need a higher resolution projector. Like the new 4K printers they are more expensive. Or you would need to stretch your regular projector, printing a bigger area with also bigger pixel size.

We hoped this was an interesting and educational read. Please send us an e-mail at info@liqcreate.com if you have any questions, comments or remarks. We wish you happy printing!