Just a few days after Elegoo released its new budget resin 3D-printer, the Mars 3, the company unveils what will be its biggest resin 3D-Printer yet, the large 6K Elegoo Jupiter. Now Elegoo has released its Kickstarter campaign and specs about its newest 3D-printer. According to Elegoo: The Elegoo Jupiter resin 3D-printer, a super-sized 12.8″ 6K LCD 3D printer that will exceed all your expectations for a large format LCD 3D printer.

Jupiter used a 12.8″ 6K LCD screen, with the higher resolution on the 6k LCD, with the expectation that even higher model quality are feasible than you normally get on resin printers. The pixel density will reduce the square edges that can sometimes occur on lower-resolution printers. The high pixel density has been designed to create high-resolution models, while the large size of the masking LCD gives users the ability to print large models, multiple small models, or anything in between.

All-metal structure for the Elegoo Jupiter

The whole body and major components are all made of metal. For example, the body used sheet metal for high strength; the material is resistant to aging and is not easily scratched. The handles and other components places are made of aluminum alloy shells, making Jupiter sturdy and lighter. 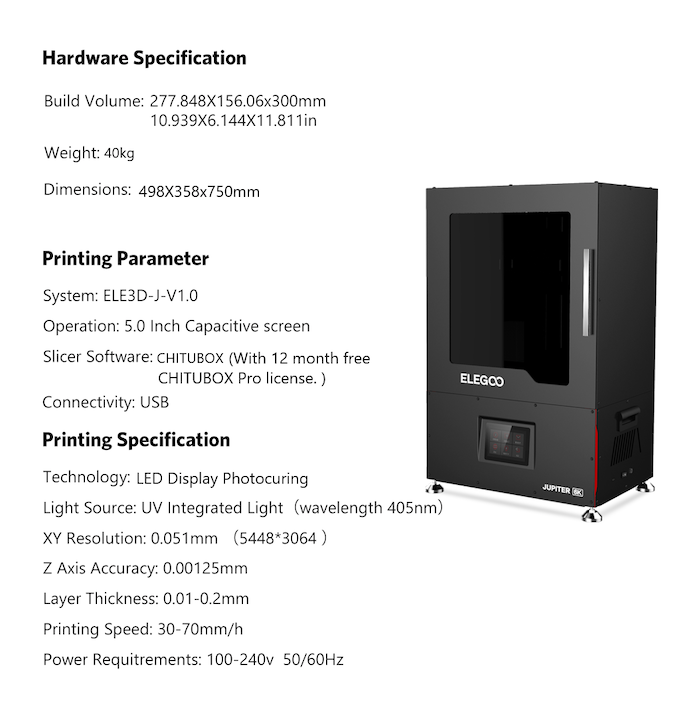 Compatible resins for the Elegoo Jupiter

As the machine is not launched, little is known how resins will react on the printer. With Liqcreate’s experience in 405nm MSLA and LCD 3D-printers, it is likely that almost the whole Liqcreate resin range will be available and compatible on the new Elegoo Jupiter resin 3D-printer. More information is available once the product launched. Send an e-mail to info@liqcreate.com if you want to be informed on resin compatibility.

Team Liqcreate wish you happy printing for the lucky people who get their hands on an Elegoo Jupiter first. If there are any questions or remarks, feel free to contact us at info@liqcreate.com any time.