During Formnext 2021 there were plenty of new resin based 3D-printing technologies and announcements. New 3D-pritners from Nexa3D, Shining3D, Axtra3D, Genera3D, Xolo3D, Azul3D, Cubicure, Origin from Stratasys, 3DWare, Sharebot, UnionTech, Rapidshape, Luxcreo, Carima and many more. Here you can find the most significant technological advancements from all the brands mentioned above.

Nexa3D a manufacturer of high-speed resin 3D printers, has announced the launch of its first desktop-based system, the XiP. Based on the firm’s LSPc technology, the XiP combines a small footprint with high throughput for production-grade applications in automotive, medical, engineering machinery, and even aerospace. Nexa3D’s product portfolio already includes the flagship NXE400, a versatile 16L industrial 3D printer with a 275 x 155 x 400mm build chamber. The latest released Nexa3D XiP, scales LSPc down to the desktop range for the very first time. The 3D printer offers a build volume of 190 x 110 x 170mm combined with a 9.3” 4K Monochrome LCD screen, delivering a pixel size of 52 microns. The Nexa3D XiP is expected for delivery in Q2 2022.

Axtra3D developed a new type of resin 3D-printing strategy, named Hybrid Photosynthesis (HPS). Axtra3D is bringing together the benefits of 4K DLP and laser based techniques in one resin based 3D-Printer, the Lumia. Axtra3D promises a large build area, continuous printing, high-resolution, speed, surface quality, and isotropic part performance. This marriage of processes means part layers are cured via a projector while at the same time, the part edges are cured with a laser. This way the DLP projector is scaled with big pixels, while the sharp pixel edges are smoothened by a laser. This results in a build volume of 265 x 150 x 600 mm (X * Y * Z) and XY resolution of 40 microns! A print speed of up to 9 mm/minute is possible with this patented technology.

During Formnext, Genera3D announced a significant investment from 3D-printing giant Stratasys. Genera is an emerging and innovative Austrian company founded with the mission of creating a fully-automated DLP 3D printing process for serial production. Genera3D developed a 3D-printer and post-processing machines to automate the whole process. According to Genera some steps in the 3D-printing cycle are very important and an automated workflow would benefit in getting parts that have always the same quality. At the core of its technology stands the G2 3D-printer, powered by a 4K DLP system. Operating at 385 nm wavelength and a LED power of up to 30mW/cm2 a fast print speed can be achieved. The printer comes in three different forms, where the pixel size and the XY build area vary. The options in pixel size are 40, 70 and 100 micron. At 100 micon its biggest platform size of 384 x 216 x 320 mm (X * Y * Z) is achieved. The printer is designed with safety and ease of use in mind. With its F2 post-processing box of G3 full manufacturing solution. The resin always travels in sealed shuttles with RFID tags, so no contact with resin or resin soaked parts is necessary.

Next to the investment in Genera 3D, Stratasys also acquired resin 3D-printer manufacturers RPS and Origin. Similar to Genera, Origin works with 385nm DLP technology and controls almost the whole process with sensors everywhere. It is evident that Origin uses a 4K DLP unit as their build volume is 192 x 108 x 350mm (L * B * H) and a 50 micron pixel size.

Video by Stratasys and Origin: Origin’s systems can be chained together using its proprietary cloud-based software to create DLP production lines.

Xolo3D announced its new printer at Formnext, the Xolo Xube. The printer is a big cube of resin and cures from a laser line and projector from the side. A 405nm diode laser is transformed to a laser line and collimated through lenses to generate a thin homogeneous light sheet. The thickness of the light sheet determines the z-resolution. A video of slice images obtained from the 3D model to be created is displayed and focused into the light sheet. The projector emits visible light and maintains the focus while the container moves away from the projector. The resolution in x and y direction is determined by the projector resolution and desired object size. Crossing light beams (x) generate entire objects (holos), called that xolography.  A light sheet of a specific wavelength activates a thin layer of photoinitiator inside the resin. An orthogonally arranged projector beams sectional images of a 3D model into the light sheet. Only the initiator molecules absorb the light and start to polymerize.  The projection is synchronized with the moving resin volume and the desired object will turn into a solid plastic polymer part.

Azul 3D is a leading-edge 3D printing company, transforming manufacturing with proprietary High Area Rapid Printing (HARP) technology. The printer is based on a 385nm DLP projector. With its build volume of 254 x 305 x 610mm and 72 micron pixel size, it is either utilizing a projector with >4K resolution. Although Azul 3D explains that these pixels are created without the need for shifting pixels. An build size of 254 x 305 at 72 micron pizel size is not possible with a 4K projector, unless pixel shifting is enabled or multiple projectors are used. Currently no information is available yet which kind of materials will run on the system. Technically Liqcreate resins can be processed, if the system is open for 3rd party 3D-printing resins. 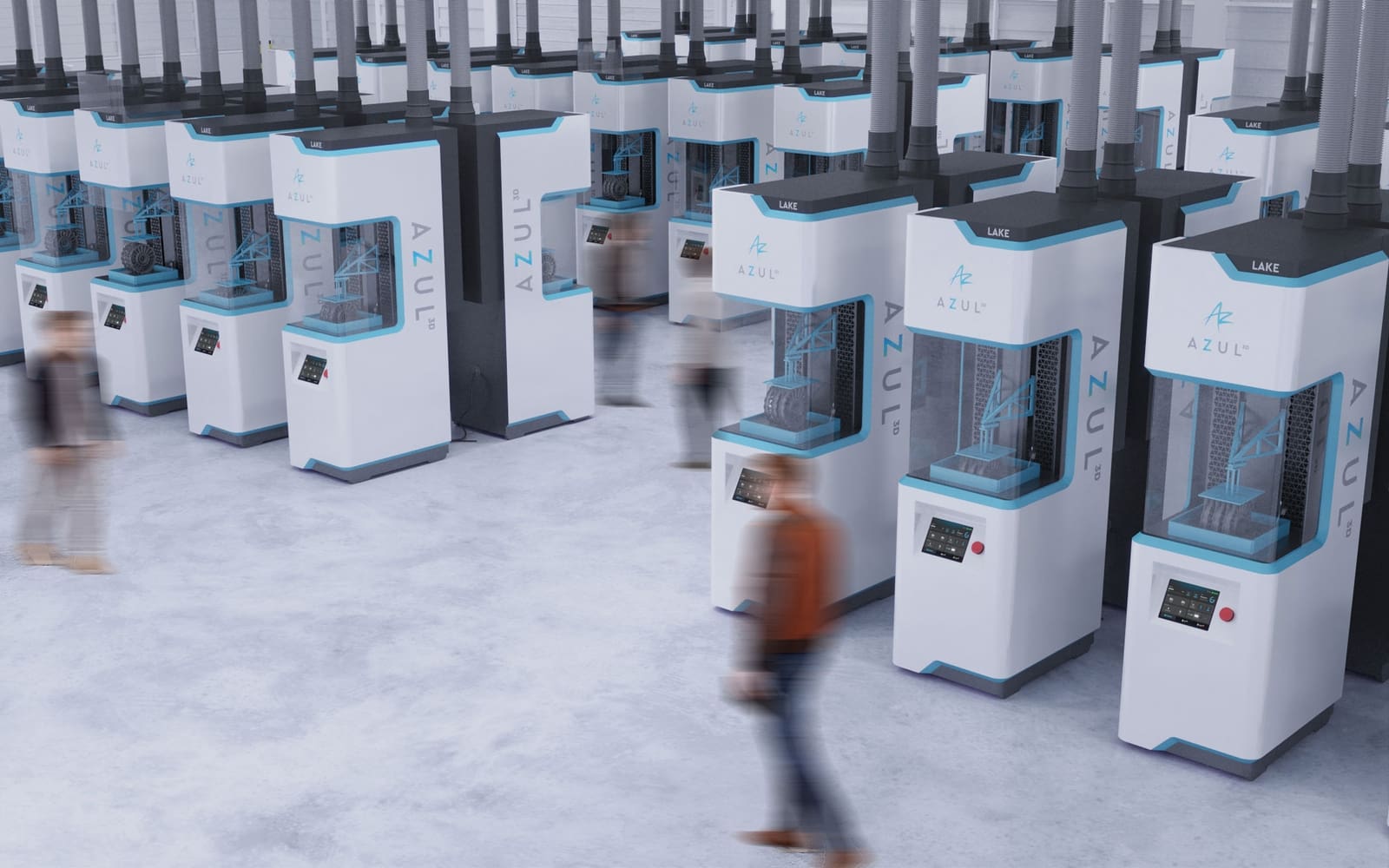 The patented Hot Lithography technology from Cubicure enables the processing of highly viscous resins. A special heating and coating mechanism produces particularly tough and temperature-resistant polymers. At this technology’s core lies a specially developed, patented heating and coating mechanism. This mechanism is capable of safely processing even highly viscous resins and pastes at working temperatures of up to 120 °C with the utmost precision.

Headquartered in Mumbai, 3DWare  develops and manufactures industrial Additive Manufacturing Systems primarily for the jewelry, dental  and hearing aid verticals. Collaborating with strong market partners likes of TITAN Company Limited, Manipal University, Jaipur, GN Resound Denmark, their machines have redefined the way production of master patterns are done with blistering build speeds of over 100mm/hour! With two different 3D-printers available, the Zeta top-down DLP and a regular DLP called the Alpha. The 3DWare Zeta has the possibility to print high viscous resins, unlocking the option for true elastomeric and rubber parts. Find the specifications below.

UnionTech has nearly 20 years of proven leadership in globally sourced stereolithography and resin 3D printing systems. The UnionTech brand brings a fresh dimension of SL equipment supply to international markets. With nearly 50% of UnionTech’s large and growing professional team dedicated to research and product development, there is a strong focus on new product and resin development. This focus on product development lead to the development of new, industrial grade DLP 3D-printers. With the introduction of UnionTech’s  Cute300 3D-printer and more printers and resins to come. Liqcreate resins are compatible with the UnionTech Cute 300 4K DLP 3D-printer. Settings and technical specifications can be found here. 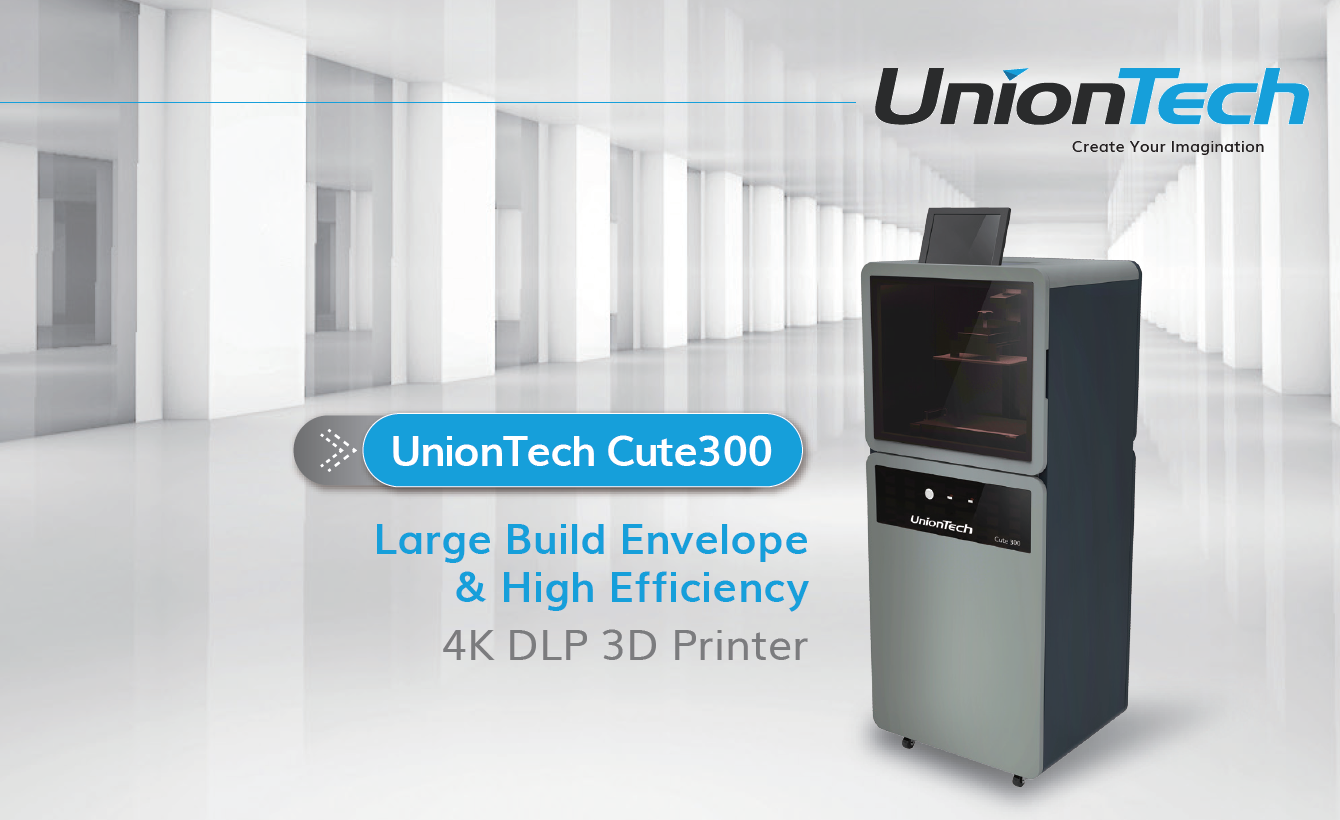 With its huge platform, the Sharebot Big is one of the biggest resin 3D-printers on the market. Competing with Photocentric and Peopoly Phenom resin 3D-printers. Unfortunately at this time more information about pricing and resin compatibility is not available.

Rapid Shape is a south Germany technology company in the field of generative rapid prototyping and rapid manufacturing systems. Rapid Shape brings a new and patented generative technology to the market that is setting a new benchmark in speed and accuracy in the field of 3D manufacturing. Research and development of the new technology and corresponding resins started already several years back. A well-founded innovation network with one of the world most important research institutes in generative production as well as multiple leading high tech and chemical companies have cooperated to come to this result. Rapid Shape is active in the jewelry, dental, hearing aids and industrial market.

For the dental resin 3D-printing market, Rapid Shape offers various printers all with a 385nm DLP technology. The smallest machine, the D10+ has a 720P projector, while the bigger D20+ and D30+ run on an HD projector. Its biggest resin 3D-printers, the D50+, D70+ and D90+ are build around a 4K DLP system. For its biggest printers, RapidShape also offers a complete automated factory solution with various print stations, automated part collection, automated resin regenerating system, including washing and post-curing.

Image by Rapid Shape on 3DPrint.com: the automated Dental Inline from Rapid Shape

For the jewelry market, RapidShape offers similar printers with 405nm DLP systems, named the S20+, S30+ and S30Speed as desktop resin 3D-printers. For industrial jewelry resin 3D-printing, the industrial S90 standalone and S90 cabinet are available. The hearing aid and industrial resin 3D-printers are quite similar than the dental printers when comparing specifications. A long of small to big printers with 385nm light source. Resin compatibility with Liqcreate resins might be available soon. Contact us for more information.

Image by Rapidshape on 3D-printing media network: The workflow of 3D-printing in digital dental labs. From scan, to software, to printing and post-processing.

Luxcreo debuts its new resin 3D-printer, the  iLux on Formnext

LuxCreo is committed to innovation, product excellence, and customer success within the resin 3D-printing market. Providing fully integrated solutions – cloud connected 3D printers, AI-enabled printing software, and advanced materials, LuxCreo is transforming the way businesses design and manufacture products in consumer, medical, dental, and industrial industries. Before Formnext, only larger resin 3D-printers with the LuxCreo Lux 3+ and Lux 3L+.  Recently the smaller LuxCreo iLux and iLux pro was released which makes it easier for smal and medium companies to enter into resin 3D-printing. Find the specifications below.

Carima is a predecessor of the CK industry, which manufactured photolithography machines, and was founded in the year of 2000 with the idea of “carry + imagine” for a 3D printer. C-CAT stands for Carima Continuous Additive Technology, allowing DLP 3D printers to print fast, continuous layers. C-CAT was first revealed in 2015, and the new C-CAT has unveiled in 2020. The new C-CAT has been newly improved and developed to print faster, accurate continuous layers.

The existing continuous layer method uses an oxygen layer to release force causing the layer to become thinner or disappear due to the inflow of resin. In order to minimize the dissipation, our technology dramatically improved the disjunctive surface technology so that it can be less than 1/100th lower than the existing film. We have not only improved the dissipation but also increased the option to choose output layer thickness. Due to its weak release force, continuous molding is possible during printing, allowing to print output up to 60cm per hour. The technology is compatible with Carima’s industrial materials as well as photopolymers from other companies. Compatibility with Liqcreate resins is yet to be determined.