In a previous article, we explained how continues 3D-printing works, you can read the details here. In this article we focus how this technology is used in the 3D-systems Figure 4 resin 3D-printer. The Figure 4 is quite similar than its competitors Carbon3D with their DLS (digital light synthesis), EnvisionTEC (ETEC) with the cDLM printers and Carima’s C-CAT technology.

How does 3D-Systems Figure 4 work?

In 2019, Fabbaloo wrote an article about the Figure 4 technology, you can read the article here. Although it is an in-depth article, some details were not known or published at that time. According to Fabbaloo: “The Figure 4 is one of 3D Systems’ key products these days, as it addresses the needs of both manufacturing and prototyping. It uses the SLA process, in which a laser sweeps across the bottom of a resin tank to selectively cure material. This repeats layer-by-layer to form complete objects. The Figure 4 has a special film to separate the resin from the laser mechanics, and it is air permeable. The built plate is locked down by a vacuum system, and the permeable layer allows the natural formation of a 10 micron air layer on the wet side of the film. There is apparently no need for pumping air through the film.” 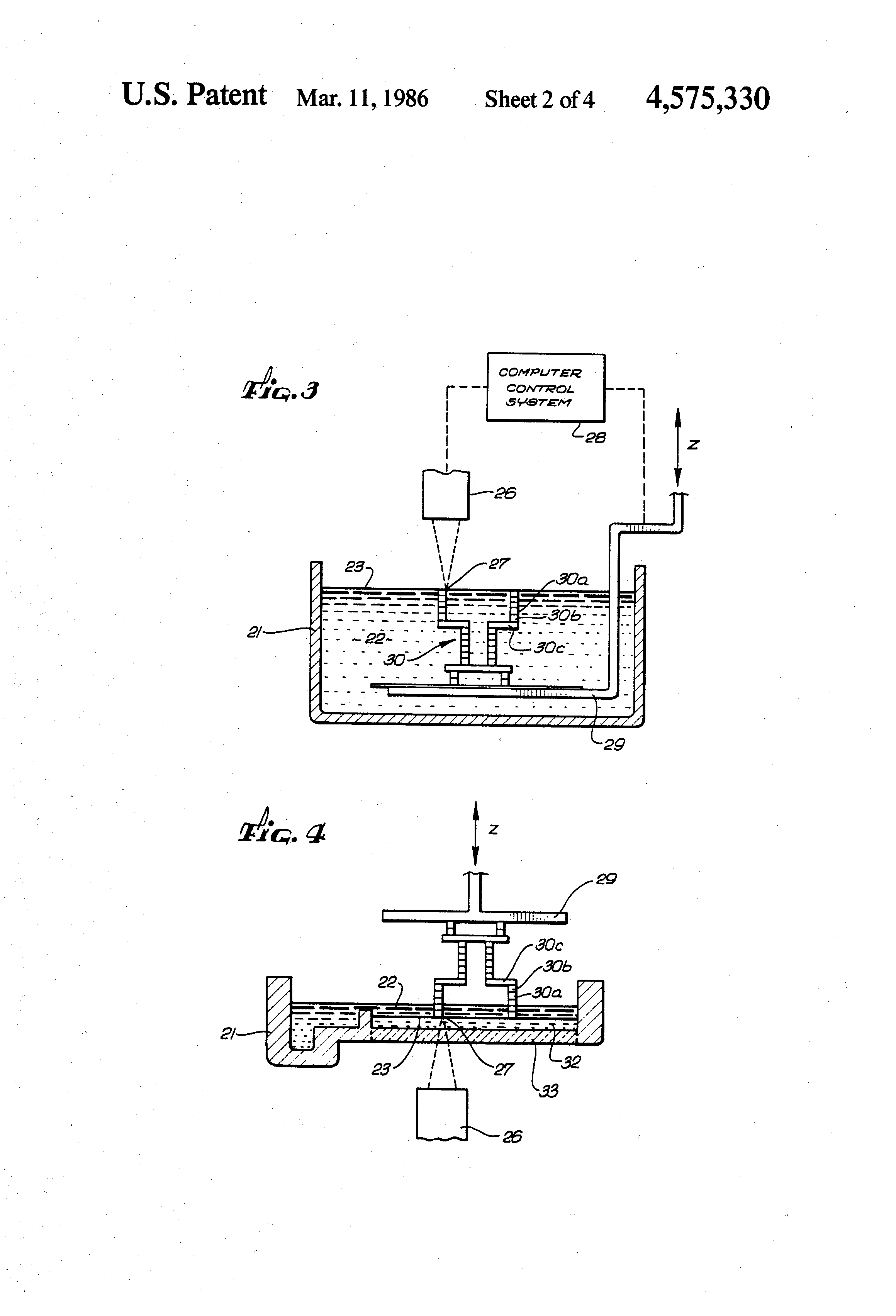 Image from 3D-systems first patent (US4575330A): The naming of the Figure 4 comes from one of the figures from the first patent.

Fabbaloo continues: “I had some concerns that the interface between the air layer and the resin might be irregularly shaped, perhaps causing quality issues when 3D printing, but it turns out this is not the case. The air layer is perfectly flat due to surface tension, and thus provides a perfectly flat resin surface for the laser to impact.

The result of this is that the Figure 4 can 3D print near-continuously without the need to pause for “peeling”. I was told by a 3D Systems representative the system is theoretically capable of 3D printing at 100mm vertical per hour in solid form, which is quite impressive. “

With today’s knowledge, it can be stated that 3D-systems Figure 4 uses a 405nm DLP module instead of a laser. According to the specifications of the Figure 4, it uses a HD projector (1920 * 1080 pixels) at 65 micron pixel size. This results in a build size of 142.8 * 70.2 * 196 mm (L * W * H). The specifications of the light source and DLP module are quite standard in resin 3D-printing. What makes it special is that it uses an oxygen permeable membrane on the bottom of the resin tank. This membrane will allow oxygen to penetrate in the first microns of the resin and which will inhibit the polymerization reaction. In practice that means that the first few microns will not solidify during printing and the part will be printed on top of a liquid layer of resin. That will eliminate the bottom of the resin tank to stick to the part and will thus eliminate a peeling step during printing. By eliminating this step, a much higher print speed is possible.

In the earlier published article about continues 3D-printing, we suspect that Carbon uses a special type of Teflon (Teflon AF 1600 or Teflon AF 2400). It is unknown what type of film 3D-systems is using. Some resent patents (US20210146611A1) indicate that 3D-systems might be using a cast polypropylene film (CPP). But the actual type of film is not important the users, as long as it works reliable and is not too expensive.

Table 1: Gas permeability including oxygen for the special Teflon AF 1600 and Teflon AF 2400 grades from the Carbon patent.

As far as we know, the 3D-systems Figure 4 printer is closed for 3rd party materials. The bottles have a tag and needs to be scanned before printing. This will limit the use of 3rd party materials. Technically Liqcreate materials will work on the 405nm DLP that the Figure 4 is using, it is only restricted by software. Some users experimented with Liqcreate materials on the Figure 4 by scanning a commercial 3D-systems bottle.