About the DLP resin 3D-printing technology

According to Anycubic their DLP printer direct 405nm light with a high precision. This high precision makes it possible that even with a lower specified resolution of 720p, the results are visibly better than those coming out of a 4K LCD or MSLA 3D-printer. Because LCD printers stretch pixels the larger the screen, even higher resolution LCD printers don’t come close to to the life-like result of prints made on the Photon Ultra. 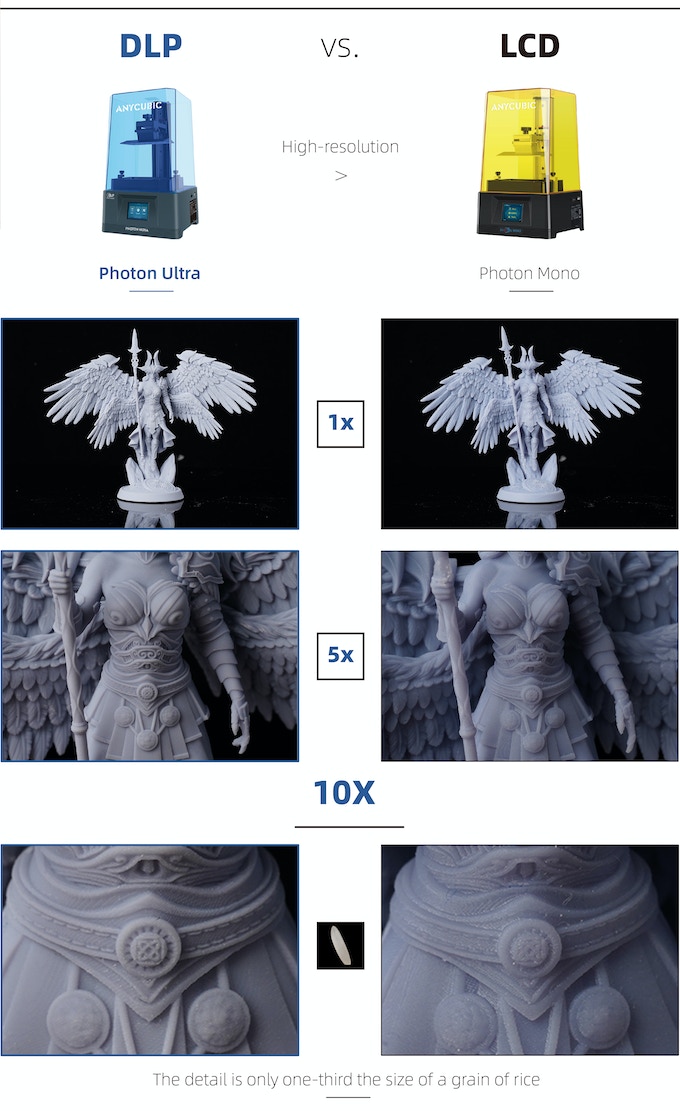 Image by Anycubic: difference between the DLP 3D-printing process of the Photon Ultra and the LCD 3D-printing process in the Anycubic Photon MonoAnycubic explains: “Let’s dive deeper into the tech, what makes a resin DLP 3D-printer so significantly better than a resin LCD 3D-printer? It all comes down to how light reaches the resin. With a LCD 3D-printer, a UV light array shines through a screen that has either open or closed pixels. However, the light source is always on, which gives light leaks. Even on dark pixels. You can compare this to a TV screen, if you look closely, you’ll see that black is never truly black. A DLP printer on the other hand has an optical projector, similar to those you find in a cinema. Shining concentrated beams of light only where the resin needs to cure. This way a DLP projector is  producing incredibly crisp results without light leaks or blurry edges.”

Team Liqcreate wish you happy printing for the lucky people who get their hands on an Anycubic Photon Ultra first. If there are any questions or remarks, feel free to contact us at info@liqcreate.com any time.