Photocentric is founded the summer of 2002 in Peterborough in the United Kingdom. Photocenric was initially build around a  patent of pre-packaging photopolymer resin to enable stamp making and small flexographic printing plates. It took until 2014 that Photocentric started in 3D-printing. During that time, Photocentric was awarded with a UK Govt Innovate grant to develop a prototype for a new type of 3D printer powered by LCD screens. The daylight activated Stampmaker resins were used to make a 3D printed object created on the first prototype LCD resin 3D-printer. Many years, printer & resin improvements later, Photocentric has two large format resin 3D-printers to support the industry in creating large prototypes.

Photocentric has reduced its 3D-printer offering during the years to two flagship models, the LC Opus and the LC Magna. The LC Magna is one of the biggest resin 3D-printers based on LCD technology, while the LC Opus is relatively new. Little specifications are available of these printers except from what Photocentric has on their website. It seems like the LC Magna works with an RGB LCD screen and 460nm light source, making it only compatible with daylight photopolymer resins. While the LC Opus seems to be build around the latest monochrome LCD technology and 405nm wavelength, making it compatible with regular UV photopolymer resins. 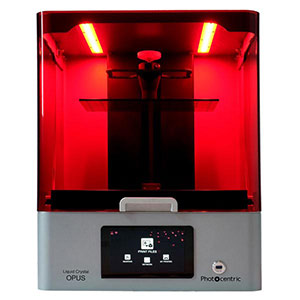 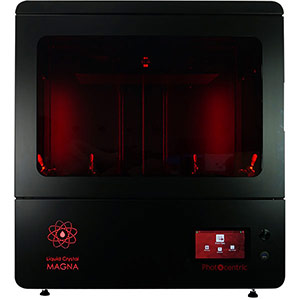 Rapid curing speeds up to 2 seconds per layer (depending on resin) at 50µm layer thickness enabling large volumes of parts to be printed quickly, accurately and consistently. With an impressive build volume of 310 x 174 x 220mm and Photocentric’s patented Peel Release ‘Vat-Lift’ technology large surface areas can be printed reliably and with ease. Meticulous attention to detail and the selection of precision engineered mechanical components deliever outstanding performance. At the moment of writing this machine was listed at the official Photocentric website for £6,295.00 excl vat.

Rapid printing speed up to 16mm per hour (depending on resin) enabling large volumes of parts to be printed quickly, accurately and consistently. With a large platform and build volume of 510 x 280 x 350mm a wide variety of parts can be easily produced. With such a large build volume, the pixel size of around 130 microns is fairly big. At the moment of writing this machine was listed at the official Photocentric website for £14,995.00 excl vat.

Liqcreate developed a variety of engineering, dental, wax-based and prototyping resins which are compatible on open resin 3D-printers in the range of 385 – 405 nm wavelength. So technically our resins would not work on the LC Magna MSLA 3D-printer. The new LC Opus could potentially work with our materials, but unfortunately the printer is closed by its manufacturer Photocentric to work only with their own Photocentric materials. If you are interested to work with Liqcreate resins, the list of compatible resin 3D-printers is published here.