The three main 3D-printing techniques, FDM, SLS and resin 3D-printing use different polymers. FDM is widely used and compatible with a range of thermoplastic filaments. PLA and ABS are mostly used and easiest to print. For the experienced user there is a wide range of materials:

Most engineering grade thermoplastics do require a more professional machine for instance with a heated chamber. The properties of these materials are widely known and accepted in the injection molding industry. However, due to 3D-printing and its layered structure, the properties are highly depending on orientation. 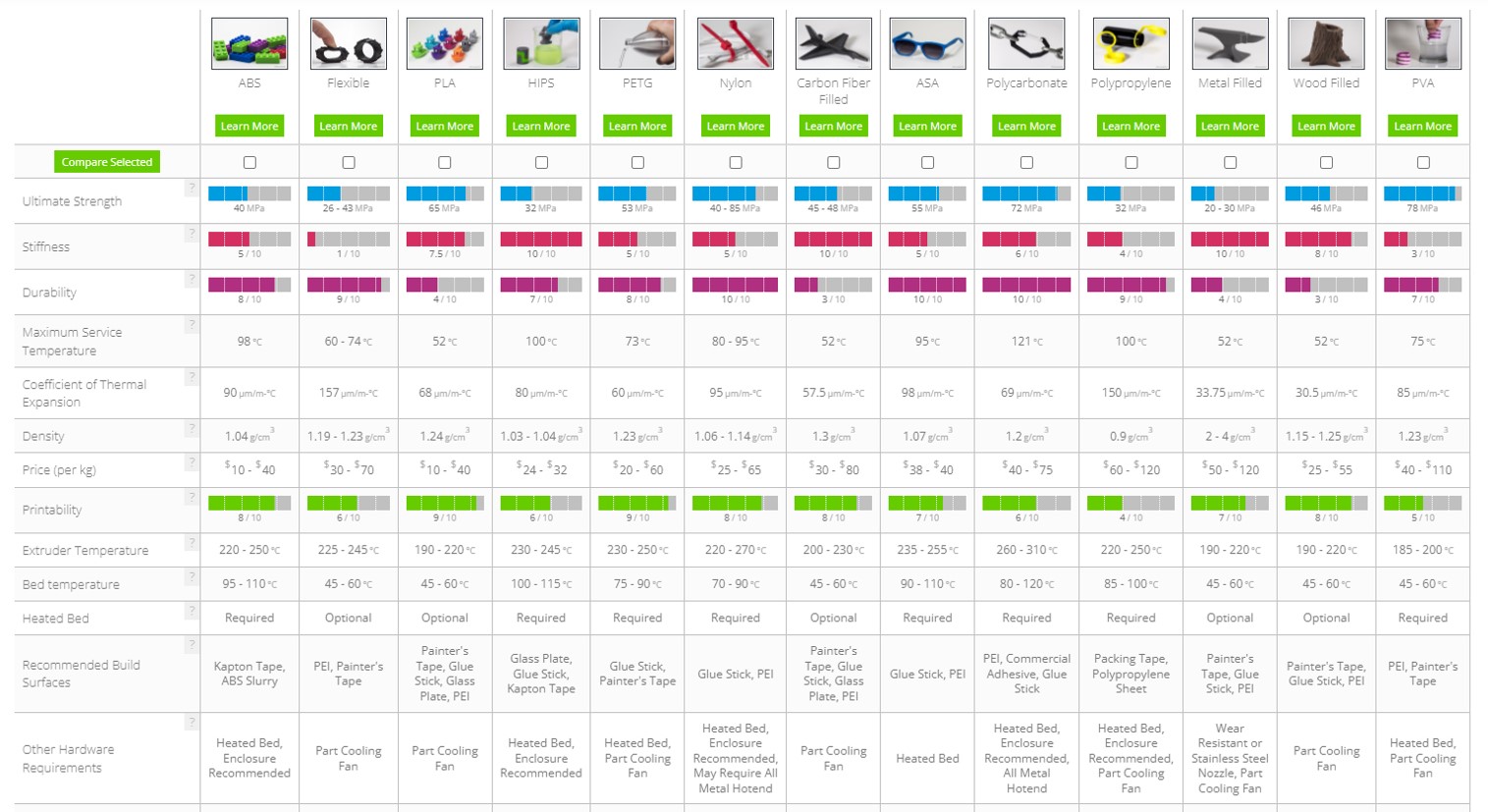 In the field of SLS 3D-printing, a few materials are available. The reason is that the materials should have a very specific melting behavior for the laser to melt the particles together. Most popular are polyamides PA11 and PA12. Next to glass-filled polyamides, PBT , PP and TPE polymer powders are recently available for SLS.

For FDM and SLS 3D-printing, the polymers are already used and known by the injection molding industry. With resin it is a bit different. Resin is a thermosetting material and every resin manufacturer makes its own formulations. Often these materials are matched with thermoplastic materials like ABS on some of its properties.

As discussed above, the materials used for FDM 3D-printing are already widely known and accepted by many industries. However, it should be noted that with 3D-printing, you will often not get the same properties compared to injection molding. Injection molding gives quite isotropic properties (similar properties in all directions). While with FDM there is a strong influence of the layer adhesion and properties can differ from Z to XY direction. In the image below, from an article published by Universitat Politècnica de Catalunya, the differences are evident when printing with PLA filament.

Image by Universitat Politècnica de Catalunya : Main effects of (A) means and (B) interactions on Young’s modulus.

The researchers discuss: ”Young’s Modulus As a predictable result, the specimens oriented along the Z-axis direction present the lowest rigidity of all, owing to their described brittle behaviour, and thus can be orientation defined as the most influential parameter (Figure 10A). The highest deformation module in the elastic regime is defined by an orientation of the fibres along the Y-axis direction, because of the different pattern deposited in this direction with regards to the X-axis orientation.”

Another study by researchers from Institute of Metrology and Biomedical Engineering at the Warsaw University of Technology found similar results. When comparing FDM 3D-printed ABS in three different print directions with injection molding. The properties of the injection molded ABS were better and more isotropic.

Image by Metrology and Biomedical Engineering, Warsaw University of Technology.

It should be noted that the results might be better in a more professional 3D-printer or with more controlled surface conditions like a heated chamber. The last study used a CTC Bizer 2X PRO series dual nozzle 3D printer from CTC Electronic.

Which resin is comparable to 3D-printed PLA filament?

3D-printing resin uses different building blocks and chemistry compared to PLA or other thermoplastic materials, it is difficult to find a 1 on 1 drop-in replacement. However, some properties can be mimicked in resin. See the comparison below with data obtained from Ultimaker materials by Farnell. The NatureWorks Ingeo Biopolymer 3052D (PLA) was chosen as reference for injection molded PLA.

In the table above it is evident that many properties of 3D-printed PLA can be mimicked with resin.

Which resin is comparable to 3D-printed ABS filament?

Similar to the table above, properties of 3D-printed ABS filament compared to their resin counterparts. Comparing BASF Forward AM Ultrafuse ABS filament to ABS (injection molded) and Liqcreate 3D-printing resin. It is difficult to give a good comparison as there are 100’s of grades of injection molded ABS and the impact strength of thermoplastics are often measured in kJ/m2 while resins use J/m. comparing some different sources gives the following comparison.

In the table above it is evident that many properties of 3D-printed ABS can be mimicked with resin. It should be noted that the impact strength of ABS is still much higher compared to resin.

Almost all mechanical properties of 3D-printed PA12 can be mimicked with Liqcreate Clear Impact resin, as demonstrated in the table above. Again it should be noted that the impact strength of injection molded PA12 is much higher compared to either SLS 3D-printed PA12 powder or resin. 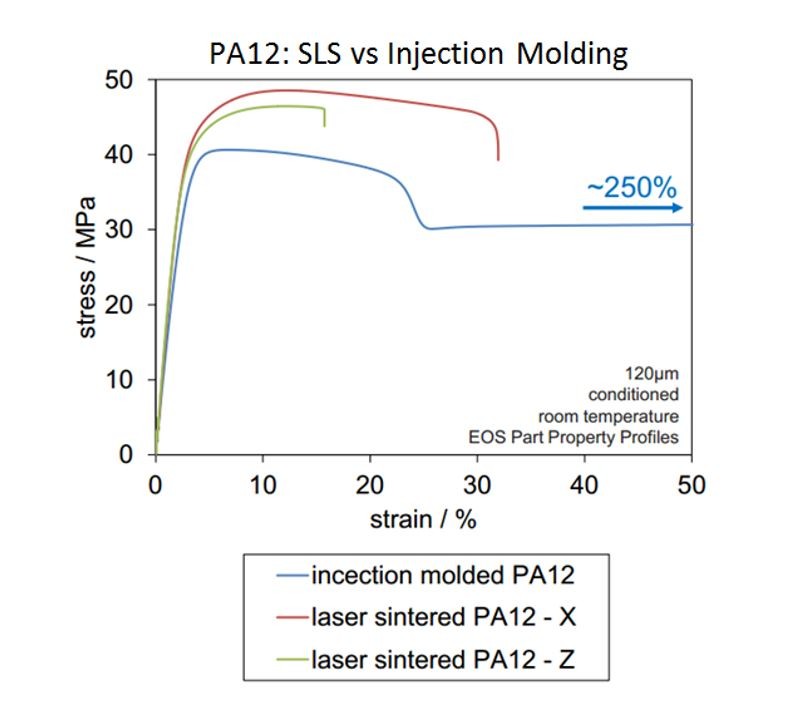 Image by Sculpteo: difference in properties of injection molded vs laser sintered PA12

Sculpteo researchers continue: “Both the SLS print orientations demonstrated higher stress than the injection molded part, but, like the FDM part, ruptured at far lower strains.”

On the surface it seemed that SLS and FDM materials based on well-known polymers had similar properties, but in the end some properties deviate due to the processing technique compared to injection molding. As said before, resin manufacturers like Liqcreate make their own formulations and building-blocks that are different from thermoplastic materials. Often a set of properties can be mimicked to these well-known thermoplastic properties, but often not all. Most resins can be categorized in 4 groups:

The properties and differences are explained in the links above.

Resin 3D-printing is well known for its isotropic properties. Meaning that the mechanical properties do not deviate as much for different orientations. In the image below it is demonstrated by 3D-systems with their Figure 4 Tough 65C Black photopolymer resin that the properties are quite isotropic. It should be noted that Liqcreate always documents the ZY orientation. 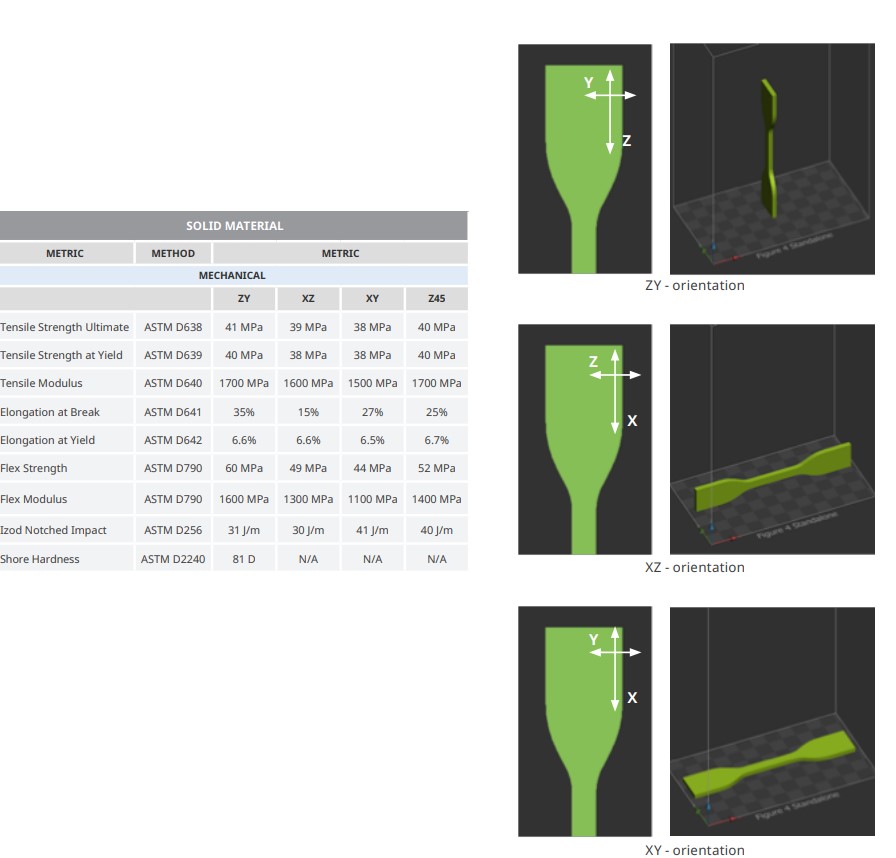 We hope this was an interesting and educational read. If you have any questions or comments, feel free to send us an e-mail at info@liqcreate.com