Researchers and students at the University of Applied Science investigated the UV aging and UV stability of 3D-printed Liqcreate resins. The aim of this research was determining the effect of UV light on Liqcreate resins in the long-term. The analysed resins in this research were the Tough-X, Flexible-X and Strong-X resins. The resins were aged in a climate chamber were 3D-printed samples were exposed to UV light. During this research, polymers that were not exposed to UV light were selected as a reference (Coded: 0 hours). The other specimen were exposed for respectively 168 and 336 hours to silumate UV aging. Several mechanical tests were performed to analyse the effect of UV aging and UV stability on the 3D-printed resin,  including IZOD Impact, Tensile strength, elongation at break and Hardness. Learn more about the different mechanical tests here.

UV aging was performed in an Ametek, Atlas Fluorescent UV /Condensation Weathering Instrument. The specimen were exposed for respectively 0, 168 and 336 hours with an UV Irradiance of 0,89 W/m2 at 25°C. 336 Hours of exposure is roughly 4,5 years real-time indoor aging.

All resins were 3D-printed on a 405nm DLP 3D-printer with pre-programmed Liqcreate resin settings. The samples were placed in the long direction on the platform, which is often seen as the weakest position to print. After 3D-printing, samples were washed in IPA for 2 times 3 minutes, dried and post-cured according to advised settings in the Wicked Engineering Curebox. For the mechanical tests, the following specimen and tests were selected:

Results for the UV aging and UV stability of Liqcreate Tough-X resin:

Tough-X becomes slightly more rigid with an 11% increase in modulus 8% reduction in elongation after 336 hours exposure. The extremely high impact of Tough-X reduces to 63% while the strength increased with 32% compared to a sample that is not aged. When designing a part for long-term use, these deviations should be taken into account.

Liqcreate Tough-X is an opaque black photopolymer resin. 3D-printed parts from this resin have exceptional durability. Liqcreate Tough-X is easy to use on all open source DLP, LCD and SLA 3D-printers in the range of 385 – 420nm. This material has excellent properties like high impact strength and up to 150% elongation, making it perfect for the production of industrial spare parts and functional tough and hard-rubber replacement products.

Results for the UV aging and UV stability of Liqcreate Flexible-X resin: 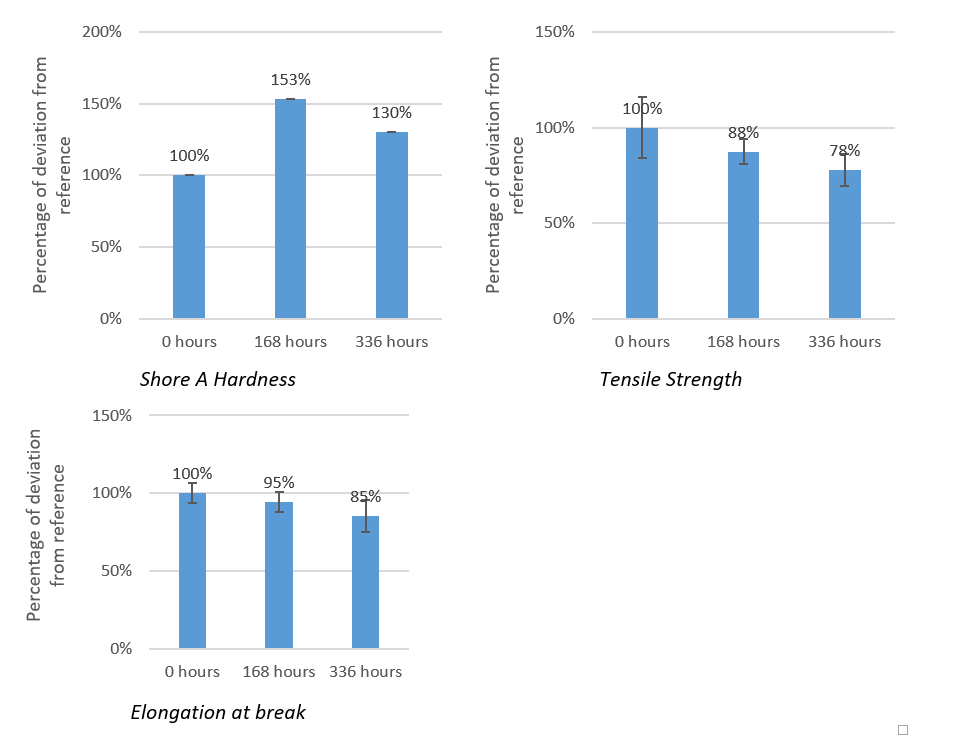 Both the elongation at break as the tensile strength show a slight reduction to compared to its original  properties after 336 hours of UV-aging of Flexible-X. While this resin slightly becomes more rigid after aging. An increase of 30% meaning that its original Shore A hardness of 55 will increase to 71 after extended UV-exposure.

Liqcreate Flexible-X is an opaque black photopolymer resin with great processability and print speed on MSLA, DLP and laser based 3D-printers. 3D-printed parts from this resin have exceptional flexibility and great rebound properties. Liqcreate Flexible-X is easy to use on all open source DLP, LCD and SLA 3D-printers in the range of 385 – 420nm. Its low hardness of 55 Shore A and elongation up to 160% makes it perfect for the production of a diversity of industrial applications.

Results for the UV aging and UV stability test of Liqcreate Strong-X resin:

Strong-X is an extremely strong and rigid 3D-printing resin. After aging, the properties slightly change and the material tends to be more rigid. The original elongation of 5-8% drops to 3-7% after 336 hours of UV-exposure, while the Shore D hardness does not change. A slight drop in tensile strength is found compared to an increase in modulus.

Liqcreate Strong-X is one of the strongest resins available in the market. Its flexural strength of 135MPa is comparable to industry’s leading dual-cure cyanate ester resins. Liqcreate Strong-X resin is easy to use on all open source SLA and DLP 3D-printers in the range of 385 – 405nm and only requires UV post-curing. This material has excellent features like high strength, high stiffness and high temperature resistance which makes it ideal for injection molding and heavy duty applications.