How does iCLIP work and what are the benefits over Carbon3D CLIP?

If the name CLIP sounds familiar, you are not alone. The CLIP technology (Continuous liquid interface production) was first developed by Joseph DeSimone and others at Stamford university back in 2015. It is the technology that Carbon was build upon. Afterwards their technology has been renamed to DLS (Digital Light Synthesis). Additionally the original inventor Joseph DeSimone stepped down from his position in 2019. Although the basis of the technology is similar. the newest iCLIP technology said to support multi-material, resin printing and even higher speed.

How does iCLIP resin 3D-printing work?

iCLIP is a vat polymerization method using UV-light to cure the resin similar to Carbon’s CLIP technology. Carbon’s latest resin 3D-printers printers use a 4K DLP printer with 385nm wavelength, similar as other printers like Asiga, Genera3D and Origin (last are both funded by Stratasys). The main difference with the original CLIP printers is that it uses an oxygen permeable membrane, something copied by 3D-systems and envisiontec later on. due to the oxygen, the first layer on the membrane does not cure and thus you are printing on liquid instead of printing on the film. this liquid gives nearly no adhesion forces and your lift movement to seperate the part from the film is therefor eliminated. This original CLIP tech sounds very interesting, but there are rumours in the industry that it has some limitations. It is marketed and patented as continues 3D-printing, but some users suspect that it cant continuesly print due to flow issues with the resin. therefor some wait steps or lift steps are presend during printing anyway. This new iCLIP tech improves on some of these limitations of CLIP while still benefiting from the advantages of the technology. iCLIP will still continue utilizing the “dead zone” or layer of oxygen which serves to greatly decrease adhesion forces during 3D-printing. These forces are common in resin 3D printing, and by eliminating them, it is possible to significantly increase printing speed. Researchers hope to fix the drawbacks from CLIP technology, including being limited to relatively low-viscosity resins, limitations in printing big cross-sections and not enabling multi-material printing. 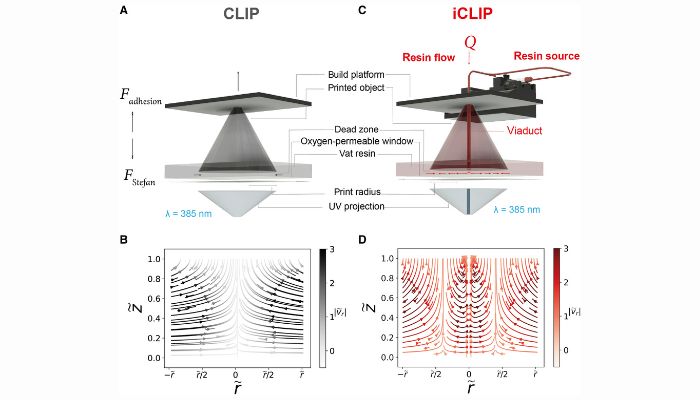 The new iCLIP tech aims to solve its resin flow (now the limitation of speed in continues 3D-printing) by using syringe pumps and adding additional resin at the middle of the printing process. This further allows for the reduction of adhesive forces, by almost two orders of magnitude according to the data, allowing for even faster printing and eliminating common defects. Additionally, thanks to the addition of resin at various points, it will allow for multi-material printing, something that is not usually possible with vat photopolymerization methods. How detailed the deposition of different resins in the same resin tank will be, will be seen in time when this research continues.