Most resin 3D-printers have a transparent film on the bottom of the resin tank. These thin films are often made from the polymer Fluorinated ethylene propylene and are therefore called FEP-films. Within 3D-printing often a thickness of 0,1mm is used. This film wears and after every few kilograms of resin you will need a new one, except if you puncture it of course. There is a new type of film available for some time. A while ago we wrote an article about this new film and what the differences are between FEP and this new type of PFA film. Since then we had ordered some PFA film to test but it took a couple months to do experimental work to find out what the actual differences were.

Already a few months ago we had equipped one of our R&D printers with this PFA film and it looked like the film was much better compared to FEP. We thought it could be used for longer without wear and the parts came out nicer. Of course this was not a 1-on-1 comparison. Therefor we have now equipped 2 similar printers (Anycubic Photon Mono). One with a new 0,1mm thick FEP film an done with a new 0,1mm PFA film.

It took some time to think what is the best method of comparison. Manufacturers of PFA claim that it sticks less to the part compared to FEP. That would be easier to test by a design with different support thicknesses. Also the manufacturers claim that it will last longer. This is more difficult to test as you have to print a lot of parts and do not damage the film yourself in between. We decided to start with some simple tests to see if PFA performs better.

We found this support thickness calibration model. This model has a variety of support thicnknesses from a 0,25mm tip, increasing to 0,8mm in the left part. 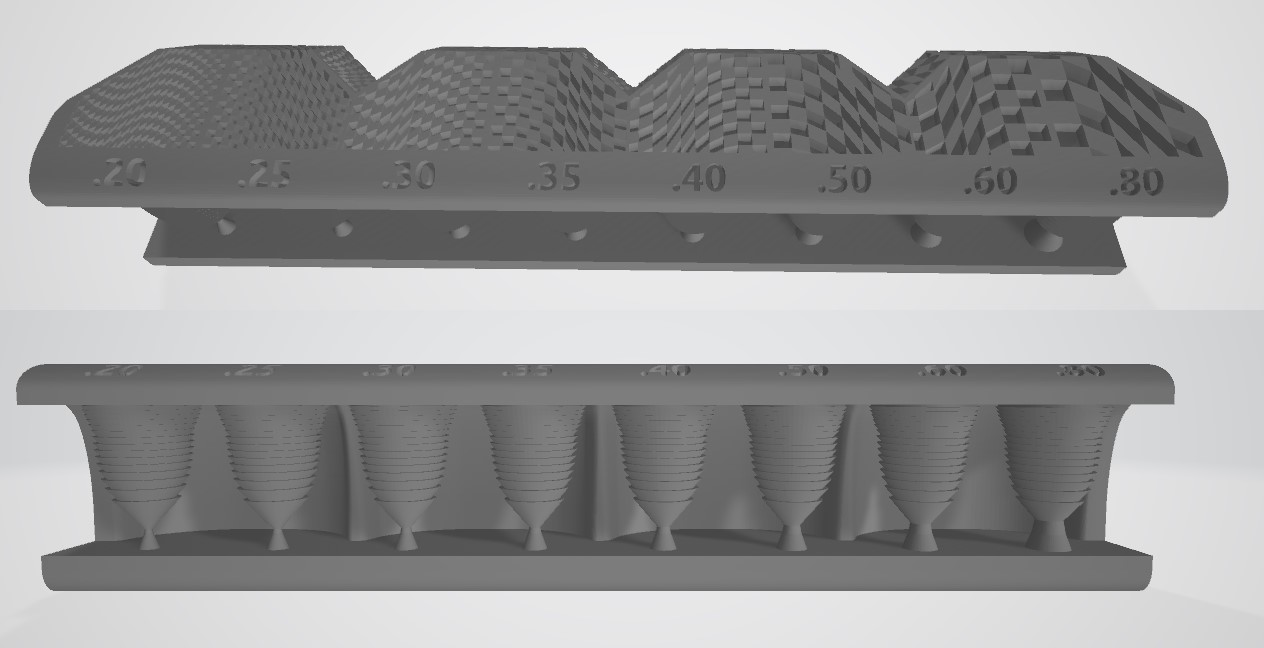 This part was printed on the Anycubic Photon Mono with Liqcreate Deep Blue settings at 0,05mm. Standard settings were used. After 45 minutes the first print was finished and we were a bit puzzled, zee the results below. 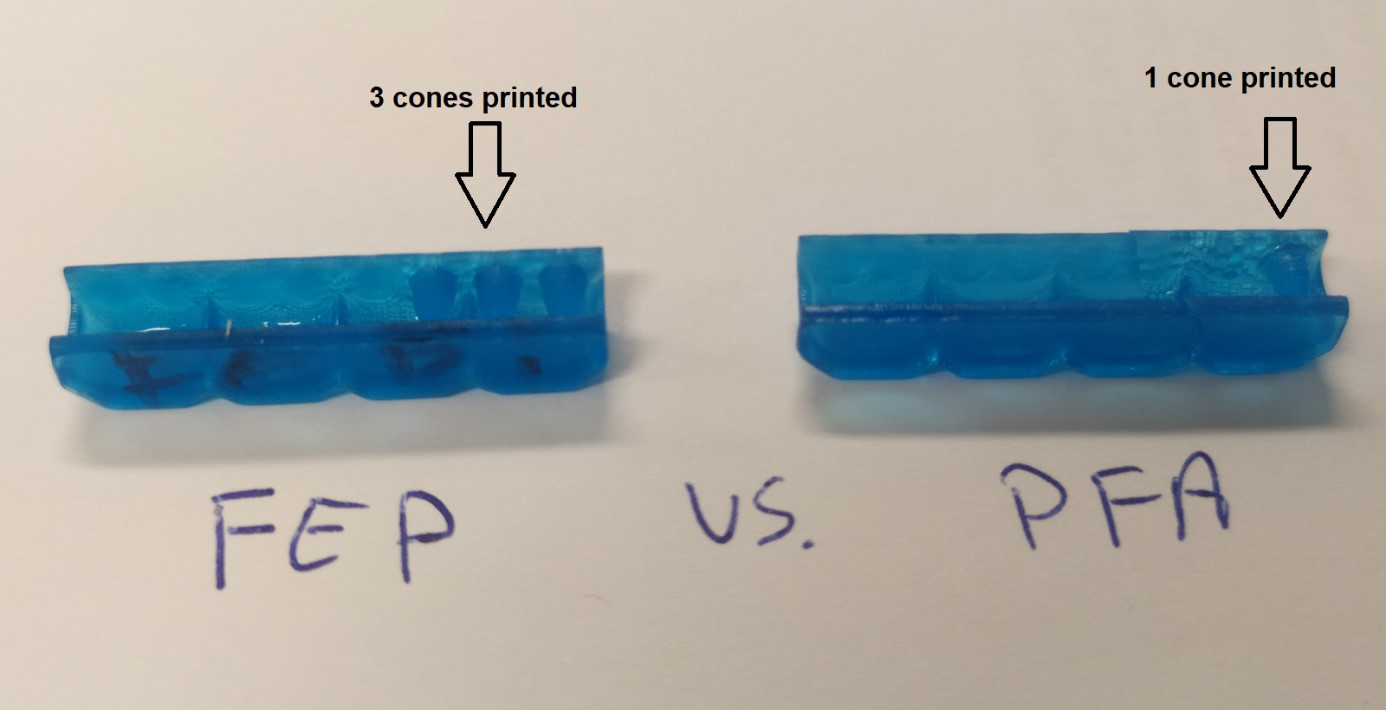 From this first test it looked like FEP performed better compared to PFA. As we were thinking it might happen that the printer that was loaded with a fresh FEP film was a ‘better’ printer, we switched the resin tanks to double check, and the same results came out. It looked like smaller parts were easier to print on FEP. This is a bit contraindicative with what we read from the PFA manufacturers and what our experiences were with the one R&D printer that we equipped with PFA film for a few months.

After this calibration model we gave it another go with an actual part. We found this raspberry pi housing on thingiverse to print. In a second attempt in proving PFA was better, we deliberately supported the part with too thin supports in the hope that FEP would fail and the printer with PFA film would perform better. These supports were used, which we know are too thin, in the hope to see a good difference.

Well, the difference between FEP and PFA we found. Although the results were similar as the first test. The part with FEP film failed, but printed large pieces of the part.

The printer equipped with PFA film barely print anything as you can see below: 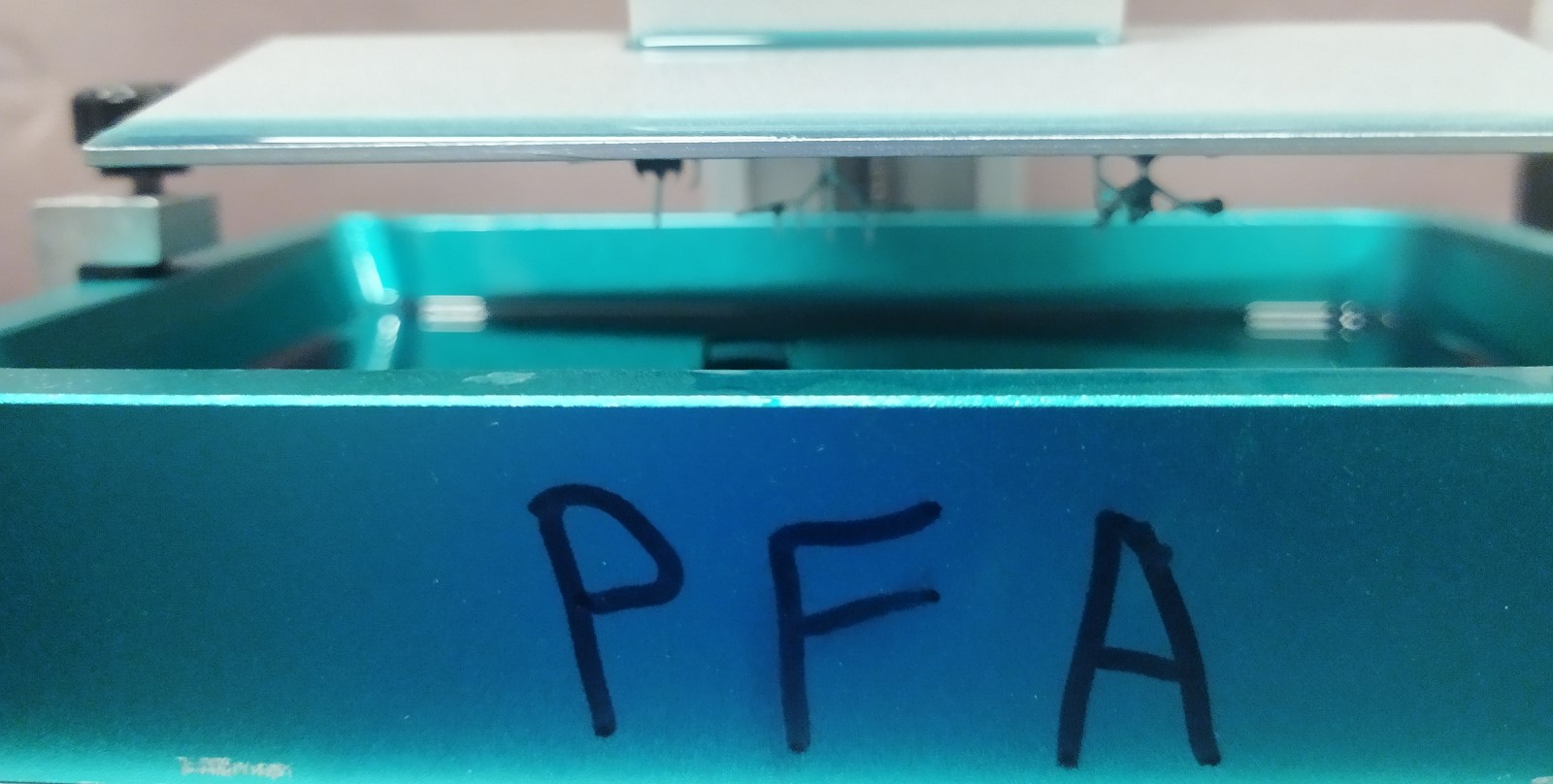 Well, from our first test it seems that FEP film is better compared to PFA and it would not be worth to change to PFA (as this film is also more expensive). But the one printer in our R&D is running for a couple months without changing the film and without much visible wear. If you change, it might be needed to increase your support tip thickness slightly. A long-term test is not planned, but would give a more definite answer if it is worth to PFA. If you change your FEP film because of wear it might be worth it. if you change it more often due to rupture of leaks that are accidentally made by the operator, then I would personally not change to a more expensive film.