The basics of resin 3D-printing are based upon the exact curing of resin at a specific location in the XYZ space. Within regular 3D-printers, the Z resolution is better defined as its layer thickness. while the XY resolution is defined by the imaging technology that makes the resin cure. From the earlier days, these were always laser based printers. Where the laser ‘writes’ in the resin and everywhere it touches the resin the material will cure into a solid plastic. Since then there have been plenty of developments in new imaging techniques. After lasers, Envisiontec (now ETEC) developed a projector based imaging technique in the early 2000’s, still known as DLP 3D-printing. This technology has some benefits over laser based systems and made it possible to develop the first desktop sized resin 3D-printers. Although the DLP technology still has some disadvantages (like limited build size / pixel size ratio and its price at the time). In around 2017 Wanhao brought the first affordable LCD based printer. Although companies like Structo and Photocentric released the technology a few years earlier. This new imaging technology based on LCD screens rapidly took over the entry-level and now even the professional resin 3D-printing space. From here the history in imaging technologies for resin 3D-printing is well-known. From 2K RGB LCD / MSLA resin 3D-printers in the beginning, it evolved to 2K monochrome screens, 4K and even 8K mono LCD screens. In this article you will learn more about the technology differences behind monochrome LCD screens vs RGB LCD imaging technology.

We couldn’t write it better as Ackuretta: “LCD stands for Liquid Crystal Display – you will be familiar with this technology, as you are reading this article either through a mobile device or a computer screen. That bright thing in front of you is the LCD screen.”

Next to the Z-axis, which provides the Z resolution, the most important component of a resin 3D-printer is its imaging system. For LCD printers it is obviously the LCD screen combined with its LED array. The technology of the LCD screens in a resin 3D-printer is quite similar as for instance a laptop LCD (except for the backlight, which we come to later). During the last decades there has been an incredible amount of work by imaging companies to create better, larger and sharper LCD screens.

How does an LCD screen work?

An LCD screen is build-up with a lot of different layers and each layer has its own function for the LCD to work. As the name LCD tells us, it display is based on liquid crystals. These crystals are randomly present and behave like a liquid in normal state. In this state they are quite transparent to light. When locally (per pixel) a current is applied on these liquid crystals, they will change orientation and block light. By doing this for every pixel and placing a background LED behind it, a 2D image is created. 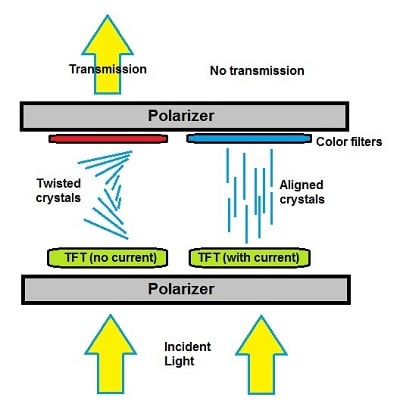 Image by Electronics360: simple schematic drawing of the important parts of an LCD screen.

In other words, if there is an electric charge applied to these liquid crystal molecules, they untwist. When they straighten out, they change the angle of the light passing through them so that it no longer matches the angle of the top polarizing filter. Consequently, no light can pass through that area of the LCD, which makes that area darker than the surrounding areas.

LCD based resin 3D-printers started with RGB LCD type of display, which works perfect for most display work. But for resin 3D-printing it is only important that you have one wavelength (one color) of light to print. This is often 405nm light, which is purple/blue-ish. On this wavelength your standard resins will work fine. The funny thing here is that the “old-fashioned” monochrome (means one color) LCD screens work much better for this. Of course these screens are not really old-fashioned and there has been a lot of development in one-color LCD screens as well in the past decades.

The picture below shows a RGB and a monochrome LCD screen. The RGB screens contain color filters. As RGB is an abbreviation for Red, Green and Blue. The color filters are necessary for color TV, phone and computer screens, but in 3D printing you don’t need color. These color filters from the first generation LCD printers lead to a reduced transmittance rate. Meaning that there is less light output and thus slower curing of the resin.

Image by Ackuretta: the difference in light output from an RGB (color) LCD screen versus a monochrome LCD screen.

Image by Chitubox / Chitusystems: difference in aperture ratio is important in LCD technology

According to Chitusystems: “The increase in aperture ratio is mainly determined by the design scheme and process capability. In the manufacturing process, the alignment accuracy of the array substrate and the color filter substrate will also have a decisive influence on the aperture ratio”.

Image by Chitubox: a square pixel is formed when the Red, Green and Blue sub-pixel is exposed.

Going back to the difference with monochrome screens, these do not have a Red, Green or Blue color filters and operate in just one color. Think it as a black and white image (with grey-tones possible). In the pixels that are displayed as white, a lot of the 405nm light from the LED’s below can pass on the complete pixel.

What are the advantages of Monochrome LCD displays in resin 3D-printing?

Monochrome LCD’s are better for resin 3D-printing as they will increase printing speed and increase the life-time of the screen. To start with the last one, LCD screens in resin 3D-printing are considered as consumables. These screens need to be replaced when the performance drops. In contrast to DLP systems, which can be re-calibrated and should work for many years. With RGB type LCD screens the lifetime of a screen is approximately 500 hours with normal usage. You will notice dead pixels, flickering LCD screen or parts not working anymore when the life-time of the LCD is over. In our experience this lifetime of an RGB LCD can vary from 200 hours to 700 hours randomly over many different printers. If you replace it yourself it costs around $30-150 on spare parts and it is a fairly easy job, manuals can be found for most printer models online. For monochrome screens the lifetime is advertised at 2000 hours, which is a major improvement over the 500 hours of the RGB LCD screens. We have been working on monochrome printers since their launch (around end of 2020). Although we do not print full-time and only for R&D and quality purpose, we have not replaced any monochrome screen at the time of writing (January 2023). The print hours were not counted but we are sure this is much more compared to the RGB screens LCD’s which we have replaced many times in the past, before de-commissioning these printers.

The brightness and contrast ration of the screens are more dialed in for 405nm light and there are no color filters present, which increases the brightness of the LED’s. These improvements all help in getting a faster print speed. The following printers are both 2K LCD printers, the photon is an RGB type and the Mono is the monochrome version. You can see the difference in print speed there:

Especially for rigid resins the print speed is very much faster on monochrome LCD screens. For instance Liqcreate Premium Model would need 16,0 seconds exposure time for 0,1mm layer thickness on an RGB screen and only 2,0 seconds on the Monochrome LCD screen from the Anycubic Photon Mono. For some specialty resins like Tough-X the print speed will only double from 30 seconds to 14 seconds, as these specialty resins need more time and UV power to cure.

Conclusion on Monochrome vs. RGB LCD screens for resin 3D-printing

With printing on >20+ LCD type printers for many years we would advise to everyone that is looking for a new resin 3D-printing to choose a monochrome LCD printer. With every new model released we see some new benefits and better LCD screens. The benefits of Monochrome LCD screens are evident and we have not found any negative side of this yet.