What is nFEP and what is the difference with regular FEP in resin 3D-printing?

What is FEP film and why is it used in resin 3D-printing?

FEP is the abbreviation of Fluorinated Ethylene Propylene and is a copolymer of hexafluoropropylene and tetrafluoroethylene. Fluorinated ethylene propylene was invented by DuPont and is sold under the brandname Teflon FEP and belongs to the same family as Teflon and other fluorinated polymers.

Image by Wikipedia: The chemical structure of FEP

FEP is very transparent and has a great strength. It has good chemical resistance and is widely available in different film thicknesses and grades. Due to its chemical resistance, it clouds very slow when the reactive photopolymer resins cure on the film. All these properties make it a fantastic use for resin 3D-printing and a relatively cheap solution.

What is nFEP and what is the difference with regular FEP in resin 3D-printing?

In the beginning there was a lot of fuzz in the market about nFEP. It was not completely clear what it was and how it could benefit resin 3D-printing. According to Phrozen3D “nFEP film is a specially treated FEP film that has a smoother and more delicate surface. The material used for the nFEP film allows it to provide less suction force in comparison to the FEP film during printing. This means that you will have a higher success rate in resin printing when the nFEP film is installed. The nFEP film is especially suitable for fast-curing resins.”

Image by Phrozen 3D: schematic view of the differences between FEP and nFEP during printing.

These days people found out what nFEP actually is and some manufacturers are more honest about it. A chemist on Reddit did some chemical analysis on it and found out that nFEP was actually PFA. And PFA is a commercial available fluorinated thermoplastic. When matching the Epax 3D nFEP film with a commercial available PFA film, an exact match was found when measuring the chemical compounds in an FTIR

They found that the differences between FEP and PFA were very small. “PFA has a higher tensile strength and elongation at break. PFA has a tensile strength of 21-31 MPa compared to 14.5-28 MPa for FEP. The elongation at break of PFA is 260-300% compared to 240-300%. So basically the force that it takes to break PFA is higher AND it is stiffer compared to FEP. This likely leads to each layer being more easily removed when lifted because the PFA fights back more, and a longer life for PFA films because of slightly higher crack resistance. how much longer…well I only have numbers not empirical data.”

What is nFEP or PFA and what is the difference with regular FEP?

According to the fluoropolymer specialists at Boedeker plastics, Inc. ”PerFluoroAlkoxy (PFA) offers similar properties to FEP, but is considered more of a premium resin. PFA is preferred when extended service is required in hostile environments involving chemical, thermal, and mechanical stress. PFA offers high melt strength, stability at high processing temperatures, excellent crack and stress resistance, a low coefficient of friction, and more than 10 times the Flex life of FEP.” 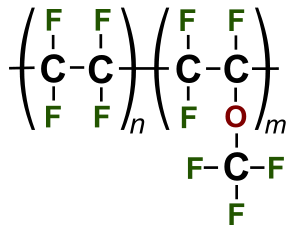 Image by Wikipedia: The chemical structure of PFA, used in nFEP film.

Looking at the chemical structure and differences between FEP, PFA and nFEP, PFA and nFEP could actually work better. A 1-on-1 comparison is difficult to make. Regular FEP films will often fail due to user damage instead of life-cycle issues. Using FEP and nFEP for an extended time on two different machines and run a lot of parts might be the best way to get a good comparison between these three films.